“I plead for disarmament and for the prohibition and abolition of nuclear weapons.”

Goal:
Get your local government (state, city, town or county) to adopt publicly a Back from the Brink: The Call to Prevent Nuclear War resolution.

Overview:
Can you imagine the United States abolishing nuclear weapons? This campaign is a next step toward making this a reality. This is an invitation to PCUSA regions, local groups, and members to participate in a one-year campaign to call on your local legislatures to pass the Back from the Brink anti-nuclear resolution (www.preventnuclearwar.org). We can do it together and PCUSA will post progress as individual groups report on their goal and actions.

We call on the United States to lead a global effort to prevent nuclear war by:

To learn more and to join the campaign, click here.

I am delighted to announce that the search for a new executive director has concluded. The National Council has appointed Johnny Zokovitch to lead our movement for peace with justice into the future. Pope Francis said in a morning homily once, “These two criteria are like the […] 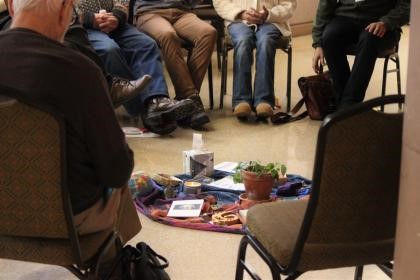 WHAT: In this introductory experience, participants will learn about the principles and practices of restorative justice, experience restorative circles, and gain an understanding of their applications in the criminal justice system, schools, parishes, ministry, and family life.

Greetings from the Catholic Nonviolence Initiative, a project of Pax Christi International. Thank you for your support and your efforts to build a more peace-filled and nonviolent world. This is a short but long-overdue note to give a bit of an update on our recent efforts.

In April, we hosted a gathering, Path of Nonviolence: Towards a Culture of Peace, at the Vatican’s Dicastery for Promoting Integral Human Development in Rome. Approximately 75 theologians, peace practitioners, bishops, archbishops, social scientists, educators, and pastoral ministry workers met for two days to share a deeper conversation about mainstreaming nonviolence in the Church and in society.

· The final statement from the April gathering is available in English, French and Spanish.

· Photos from the first day and the second day are on the Pax Christi International Flickr page.

Most comprehensive assessment of its kind;
1,000,000 species threatened with extinction

PARIS, 6 May – Nature is declining globally at rates unprecedented in human history – and the rate of species extinctions is accelerating, with grave impacts on people around the world now likely, warns a landmark new report from the Intergovernmental Science-Policy Platform on Biodiversity and Ecosystem Services (IPBES), the summary of which was approved at the 7th session of the IPBES Plenary, meeting last week (29 April – 4 May) in Paris.

“The overwhelming evidence of the IPBES Global Assessment, from a wide range of different fields of knowledge, presents an ominous picture,” said IPBES Chair, Sir Robert Watson. “The health of ecosystems on which we and all other species depend is deteriorating more rapidly than ever. We are eroding the very foundations of our economies, livelihoods, food security, health and quality of life worldwide.”

To read full article and summaries of the findings, click here.

i want to sit on this rock with you awhile, friend, think out loud a bit. first up, these new readings i’ve bumped into that continue to shake me awake. ever since starting out on my bike three years ago for mother earth, mother’s been whispering in my ear something fierce. after climate ride california last year i can think of little else. scattered news of old that held me in its addictive clutches fails to move me anymore. you move me, mother, front & center at last. Please click here to read Jim’s blog.

A Living Laboratory for Sustainability

A Project of the Florida Coalition for Peace and Justice, Inc.

(Be sure to put PCF Newsletter in subject line)

To View Photos from Past Pax Christi Florida Events

Posted in Uncategorized. Comments Off on CATHOLIC PEACE MOVEMENT